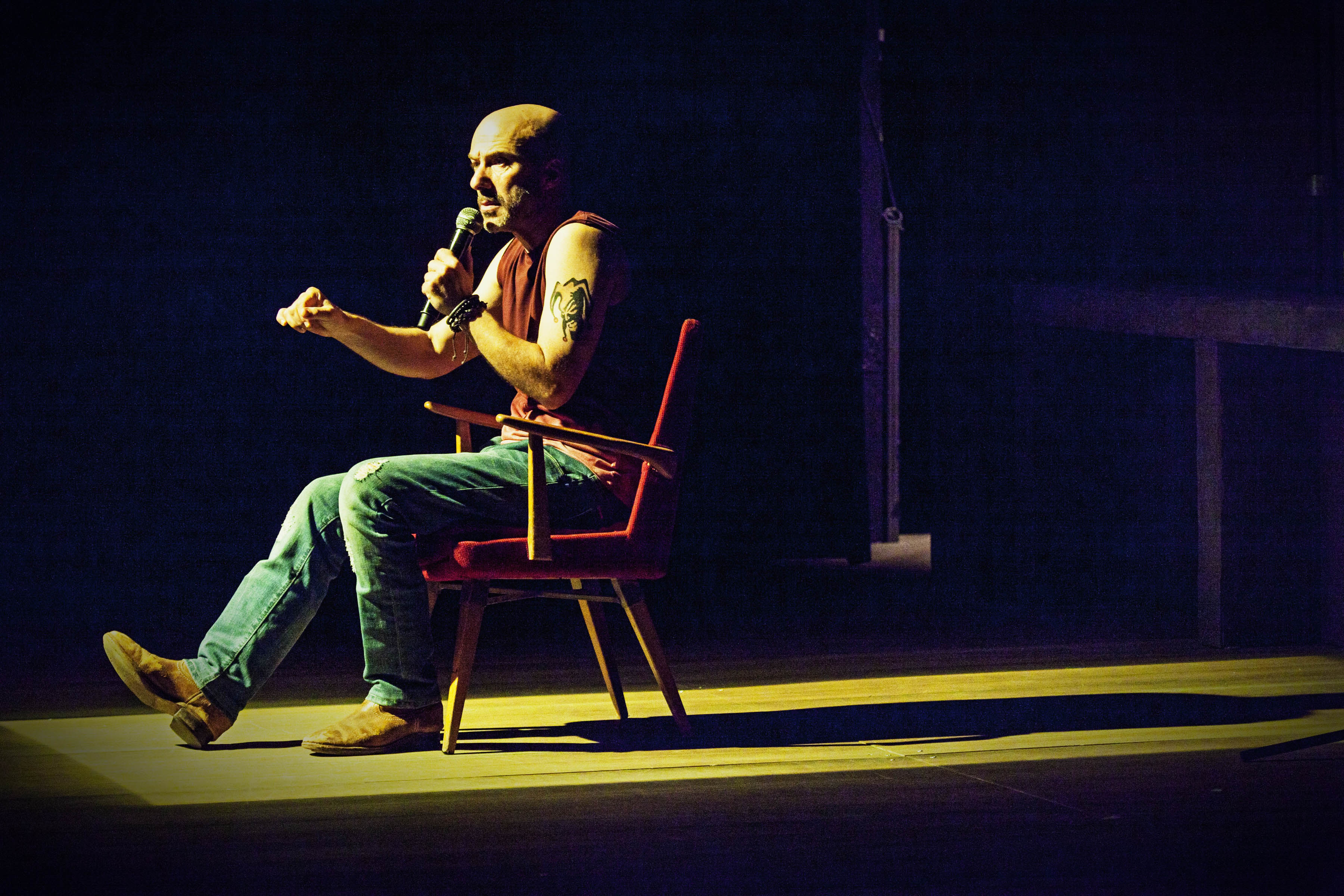 Dovaleh G’s standup comedy performance in a basement spirals out of control and takes a spine-chilling turn. In front of the audience, which includes two of his childhood friends, he carries out a searing moral stocktaking. The careening rollercoaster shifts rapidly between black humor and vitriolic satire, between loves and betrayals, longing and regrets. In standup comedy – as in life – everything is possible. This evening, which is also Dovaleh’s birthday and apparently his last performance, he no longer has anything to lose.

“Humor of a lit match above a gas tank, and a hero ready for flames!”

Dror Keren graduated from Mountview Theatre School in London. Productions he has performed in include, Cameri Theatre: Oh, Elias, Elias! (a cabaret of sketches by Hanoch Levin), Suitcase Packers, Servant of Two Masters, The Good Soul of Szechuan, Boeing-Boeing, The Producers, Ya’akobi and Leidental, Two Into One, Levine Cabaret, and Requiem. Haifa Theatre: Class Enemy, The Investigation Must Go On, and The Freedom of the City. Habima Theatre: Those Who Walked in Darkness, The Night of the Twentieth, and Arsenic and Old Lace. Gesher Theatre: Rosencrantz and Guildenstern Are Dead, Tartuffe, The Lower Depths, and City. Television: Mother’s Day, Milluim, Shabatot VeHagim, Suspect, Who’s Line Is It Anyway?, Deus, Rina and Arik Forever, Yona Sides, Scandal, Sesame Street, Zoo Stories, Uncle Pompa, and Tmuna Hada. Films: Five Hours from Paris, The Matchmaker, Aviva, My Love, Passover Fever, Adam Resurrected, Suicide, and OMG, I’m a Robot! At the Cameri Theatre he wrote and directed On The Grill. Awards include: America-Israel Cultural Foundation Award, Aharon Meskin Prize, Shimon Finkel Prize for his performance in The Night of the Twentieth, the Rosenblum Award from the Municipality of Tel Aviv, and he is twice-recipient of the Academy Award for Best TV Drama Actor. On The Other Hand, a standup comedy performance, which he also wrote, continues its successful run all over Israel.

The Cameri Theatre of Tel Aviv >