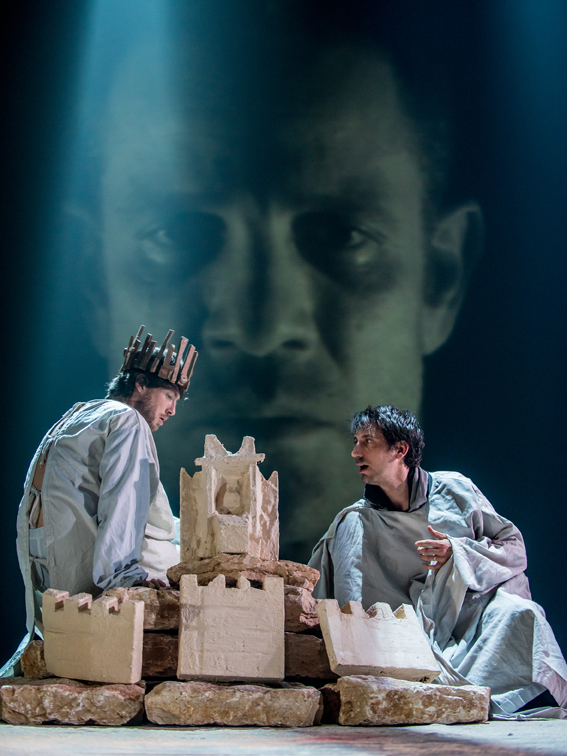 Roee Chen, after the novel by Stefan Heym, Directed by Yevgeny Arye

Who was King David? A shepherd or a gang leader? A criminal or a musician? Following the waves of rumors, his sexual choices, and the blood that flowed around him, his son Solomon demands his father’s official biography be written.

King Solomon summons historian Ethan Ben Hoshaiah to the palace and asks him to write the book. If what he writes finds favor with the king it will be included in an anthology that was collated at the time and reached us under a more familiar name – the Bible.

This is a fascinating encounter between a lone intellectual and a palace brimming with intrigues that raises questions about how we relate our history to ourselves. A brilliant modern reflection on a hero striving for truth in the morass of corrupt government.

“A beautiful, interesting, and well crafted play that stimulates a rethinking of the Biblical story, as well as its modern implications…”

Roee Chen is an author, playwright, translator and the Head of the Drama Dep. of Gesher Theatre (Tel-Aviv). He has published two books: The Ink Horses (2005) and Tel-Aviv Tales (2011). His short stories were translated to English, Russian, Ukraine, Yiddish. His original plays and adaptations include Spirit of the Theatre, (Gesher, 2016); I, Don Quixote (Gesher,2015), Alice, inspired by L. Carrol (Gehser, 2015), The Odyssey after Homer (Gesher, 2014), The Dybbuk, Enemies, The Jewbird, Six Characters in Search of an Author, A Pigeon and a Boy.

“A not-to-be-missed masterpiece… The world of the Bible comes to life, and it has never been more captivating… Everything that happens on stage borders on perfection and genius. Brilliant directing of an important play, and exceptional performances by a splendid cast – a phenomenal school of theatre…”