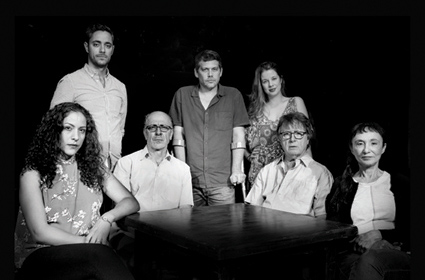 The Admission is a play about memory and denial in the context of what Israelis call their “War of Independence” and the Palestinians call their “Nakba”. The play portrays two families, one Jewish, one Palestinian. Some of the families’ members are trying to reveal the events that took place during the 1948 war between Jews and Palestinians, hoping that a new discourse will heal their wounds. Some of them are trying to deny these events, hoping that peaceful co-existence will heal their wounds.

The play was first performed at Theater J in Washington DC in 2014. It was a nominee for the Helen Hayes award for the Best Play of the Year.

“The Admission boldly explores the opposing versions of calumny that Jews and Palestinians cultivate, competing archives of victimization that minimize the other side’s scars and keep the wounds – and mistrust – forever fresh.”

Motti Lerner, Playwright, often deals with political issues. Among his plays are: Kastner, Pangs of the Messiah, Paula, and Pollard, produced by the Cameri Theatre of Tel Aviv; Exile in Jerusalem and Passing The Love of Women at Habima National Theatre, Autumn at the Beit Lessin Theatre, Hard Love at Haifa Theatre, and The Hastening of The End in the Khan Theatre, in Jerusalem.

Among his productions outside of Israel: The Murder of Isaac at Heilbronn Theater, Germany, and in Centerstage Theater, Baltimore, Benedictus at Golden Thread Theater, San Francisco, and Theater J, Washington, Paulus at Silk Road theater, Chicago, Pangs of the Messiah, and The Admission in Theater J, DC, and After the War in Mosaic Theater in DC. He wrote the books According To Chekhov and The Playwright’s Purpose. He is a recipient of the best play award (1985), the Israeli Motion Picture Academy award for the best TV drama in 1995 and in 2004, The Israeli Prime Minister Award (1994) and the Landau prize (2014).