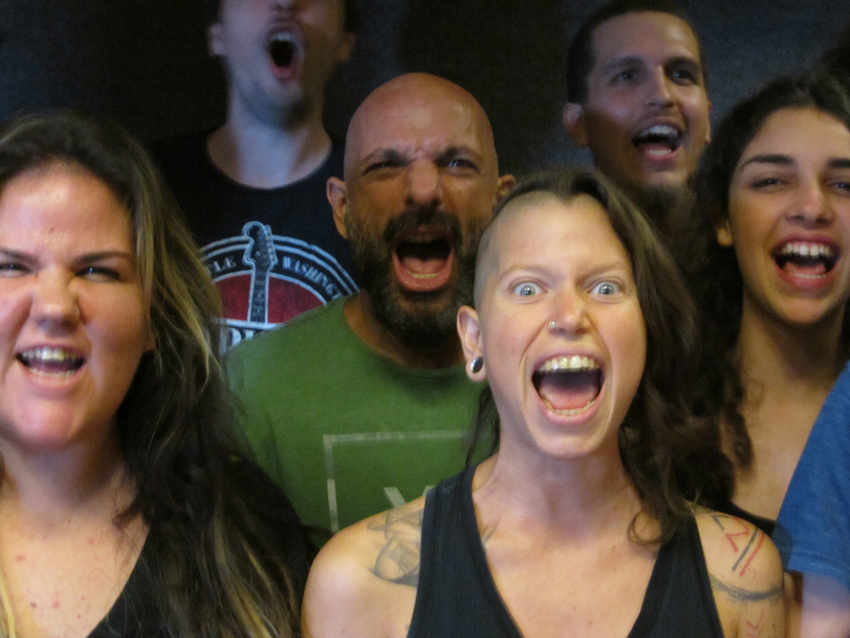 A group of young people is setting out to Masada to sing facing the sunrise. The journey goes wrong and becomes a whirling struggle with time, wind, and sea. This magnificent story by S. Yizhar is re-deciphered in a musical-theatrical performance. Fourteen singers, musicians, and actors gather to create the sea of words and the whirlwinds of sounds that strive to join the moment in which time stood still around the ancient cliffs of the Dead Sea.

Ritza (Running) dives into the depths of the local essence, peeling away musical layers hidden within the story. Ancient echoes intertwine with howling loudspeakers, the murmur of water and salt whispers and growls from the depths of the lowest point on earth. The performers experiment with various styles of collective singing: travel songs, contemporary pop, trills, lamentations, and singalongs, with the participation of the audience.

Ruth Kanner has been the creator of experimental theatre since the early 80’s. Ruth Kanner Theatre Group, founded in 1998, is a unique experimental theatre team. The group reexamines hegemonic Israeli narratives, interweaving storytelling, documentary texts, physical theatre, and visual imagery. The group has performed in Israel and worldwide. Along with the productions created with her group, Kanner is a guest director at Theater X-Cai, Tokyo, Japan, and at Penghao Theatre, Beijing. Kanner is a professor in the Department of Theater Arts at Tel Aviv University, and also presents workshops in Israel and worldwide. Kanner’s projects have won important Israeli awards.

Avshalom Ariel received his BA with distinction from The Buchmann-Mehta School of Music at Tel Aviv University. He represented the Association of Israeli Composers at the 32nd festival of Asian Composers in Tokyo. Avshalom created original musical works and collaborated with Ensemble Modern, Ensemble Meitar, Musica Nova Group, and “Tzlil Meudcan” Festival. In 2011 he created “The Love Beach Girls’ Choir,” a full-length rock opera. Avshalom composed music for Ruth Kanner’s works Matka and Sakura No Sono Nippon at the X-Cai Theater, Tokyo and for Time of Metamorphosis.