THE MARK OF CAIN

Written and Directed by Moshe Malka, The Israeli-Ethiopian Hullegeb Theatre 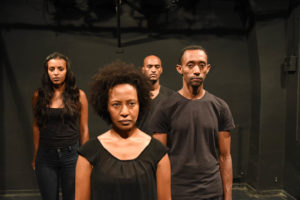 A family of Ethiopian origin attempts to cope with everyday hardships despite the social stain on one of its members. The father decides to abandon the family and return to Ethiopia, leaving the mother and her three children on a slippery slope on which their personal stories intersect until the tragic end. The play consists of realistic materials, and is performed in a minimalist and restrained physical theater style.

The Mark of Cain was created under the influence of the turbulent events the Ethiopian community underwent in the past year. The protest, the rage, and the pain that erupted due to the status of Ethiopians in Israel, and the police’s violent attitude toward them, greatly influenced the creation and writing of the play. It was also influenced by the story of the young Ethiopian Yosef Salamsa, the circumstances of whose death remain a mystery. This is a parable about Ethiopian society attempting to establish its life in Israel, but repeatedly forced to contend with prejudices that place numerous obstacles on its path.

The work process on the project, from the idea and writing stage up to formulating the play, lasted about eight months. The cast, all drama school graduates yearning for recognition and work in theatre, found a home in the Hullegeb Theatre in Confederation House. It is actually the only theatre in Israel that enables actors of Ethiopian origin to be who they are without stereotyping and predictable casting.

The Israeli-Ethiopian Hullegeb Theatre is a social identity laboratory where materials are examined during rehearsals, such as connection with the Jewish people, social status, and belonging.

THIRD PART OF THE TRILOGY ACCO MY LOVE 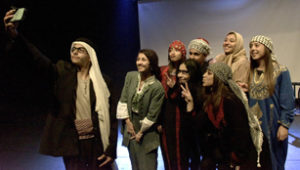 The third and last part in the trilogy Acco My Love (based on Um Mohammed and Nawal Zini) encounters the artist with a group of young Palestinians, residents of Acco, who study theatre with Maisara Masri, a member of Acco Theatre Ensemble and one of the founders of the theatre. Heela, a popular word among the Arab fishermen, means “forward.”

The work that came out of this meeting raises many questions and complex feelings. A deep frustration as a result of the need to feel a part of this land, fear of the future due to the situation in the present, criticism and a strong connection to the place, the landscape, the Palestinian heritage and history, and an open perspective to accept the other.

This bond is just as powerful as the connection of the Jews to the Land of Israel. Some of the relatives of the children live in Gaza and in the West Bank. The children, just like adult Palestinian society in Israel, often find themselves in paradoxical situations.

Smadar Yaaron is a multidisciplinary creator, one of the founders of the Acco Theatre Center (1985), who has significantly contributed to the unique nature of the Center and to its methodology. She engages in the development of artistic encounters between extended genres of the performing arts such as music, dance, and intercultural exchange.
She is the artistic director of the Dance Greenhouse, and the Acco Theatre Center’s Arabic Monologue Masrahid Festival, and was a co-director of the Acco Festival of Alternative Israeli Theatre together with Moni Yosef (2008-2012) and artistic director of the Tools Testing Festival 2013.
She teaches at Western Galilee College and at the Academy of Performing Arts, and frequently performs her works. She is a recipient of numerous awards, to name a few, the Mifal Hapayis Michael Landau’s Performing Arts Actress Award, Best Play Award at the Du Oman Festival (Habima), and the Actress Award (Zurich Festival).

Maisara Masri was born in Acco. He joined the Acco Theatre Center in 1987, he has been acting and directing in different shows produced by the theatre. In addition, he teaches acting in several schools, and has a busy career in television and cinema.

Nataly Turjeman (PhD) was born in Acco, Israel. A lecturer in Haifa University’s Graduate School of Creative Arts Therapies. She is a drama therapist and a stage director.

Documentation of the show: 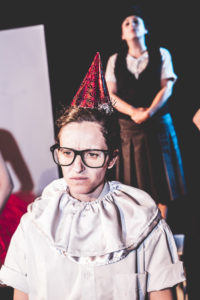 In 1964, in Soviet Russia, the Nobel Prize-winning poet Joseph Brodsky was tried on a charge of “parasitism” because his work was considered an insufficient contribution to the Communist state.

The show consists of different scenes from the lives of Soviet citizens between the 1930s and the 1960s, based on documentary, literary, and personal materials.

These scenes raise questions regarding relations between the citizen and the state, and freedom of speech and thought – issues that are as relevant today as they were in the past. The show was created by the actors Yoav Sadowsky, Dorin Mendel, Orianne Gliksberg Partem, and Racheli Ankor, and designed by Adi Brodsly. The theatre language combines elements of puppetry, performance, and animation.

Born in Russia in 1987, Vera Berzak Schneider now lives and creates in Israel. She graduated from the School of Visual Theatre in 2012, and from Bamat Meizag, where she studied performance, in 2013. A multidisciplinary artist who works as a writer, director, and performer, she is a member of Performance Ensemble Miklat 209.

A STORY YET UNTOLD She was still a child and felt like a grown woman… Adult males had abused her body and made her feel dirty and in sin… Today, after she has “locked up” the past, cruel and brutal memories have captured her in torture and trauma. The only safe corner she could ever find was being with her therapist – Nadia; there she speaks out her “truth”; without shame, lies, feelings of stupidity or guilt… here, she copes with fears, hesitation, crisis and anxieties, turning her inner darkness into light. The play is based on a true story of an Arab sexually-abused victim.

The play won best directing and best play prizes in Morocco’s Alcázar Alcbir, as well as an honorable mention at Theatrenetto Festival 2016 in Tel Aviv. Winner of the “Golden Porcupine” award for Best Performance in a One-Person Show.

This production of the Ensemble Fringe Theater of Nazareth is in collaboration with The Multi Services Center for Treatment of Sexual Assault Victims in Nazareth.

Hisham Suleiman is an actor and director, as well as an acting coach and a writer. Graduate of the Yoram Levinstein Drama Studio, he is the founder and the artistic director of the Ensemble Fringe Theatre of Nazareth. He appeared in numerous films, TV series and theatre productions.

Raheeq Haj Yehia Suleiman is a graduate of Haifa University in Art Therapy. She is also a qualified therapist in psychodrama, and holds a B.A. from Jerusalem University in Theatre Studies and in Arab Literature. As a therapist she works with drug addicts, victims of physical abuse, and more.