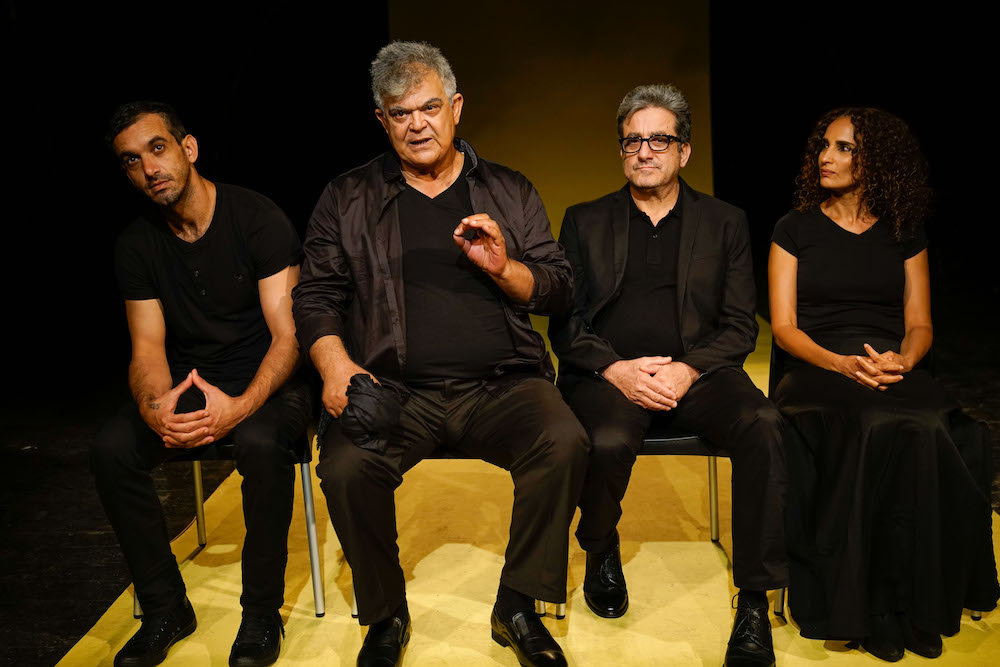 Based on The Yellow Wind by David Grossman; Adapted and Directed by Ilan Ronen

Twenty years after the Six-Day War, the weekly magazine Koteret Rashit (Headline) initiated the thought-provoking documentary piece The Yellow Wind. This was the result of seven feverish weeks of David Grossman, an Arabic speaker, wandering around the West Bank, visiting refugee camps, courts of law, settlements, towns, and villages, just before the outbreak of the first Intifada.
The testimonies from the West Bank were documented over thirty years ago, but when presented on stage today, it seems as though nothing has changed, and they are as relevant today as they were then.
The new stage version of The Yellow Wind premiered as part of the International Theatre Festival, Jaffa Fest, as a co-production of Jaffa Theatre and Tzavta Theatre.

This production will be streamed live on the opening night, as part of the “Panel Discussion: Theatre and Peace” on November 26, 2020 at 17:00

David Grossman was born in Jerusalem in 1954. His books have been translated into forty-five languages. He is the author of nine internationally acclaimed novels, three powerful works of non-fiction, and a short story collection, as well as nineteen children’s books, a children’s opera, and a play. Grossman has been presented with numerous awards including Chevalier de l’Ordre des Arts et des Lettres (France), The Marsh Award for Children’s Literature in Translation (UK), the Buxtehuder Bulle (Germany), the Sapir Prize (Israel), the Premio per la pace e l’azione umanitaria 2006 (City of Rome/Italy), Onorificenza della stella solidarità Italiana 2007, Premio Ischia – International Award for Journalism 2007, the EMET Award 2007 (Israel), and the Albatross Prize, awarded by the Gunter Grass Foundation. Grossman was also the recipient of the prestigious Peace Prize of the German Booksellers Association in Frankfurt 2010, and France’s Prix Medicis for translated literature in 2011, as well as the Brenner Prize (Israel) in 2012. In 2013 he received the French Point award for most beloved book by readers and critics (To the End of the Land), and the Italian Fundazione Calcari for Lifetime Achievement. His new novel, A Horse Walks into a Bar, winner of Mann Booker Prize for 2017, has been published internationally in over thirty-five languages throughout 2016-17.

Ilan Ronen began a successful career as a director and artistic director of the Jerusalem Khan Theatre, the Cameri Theatre, and Habima National Theatre. In 1996, he established The Young Actors Group of Habima, and nurtured it until he was appointed artistic director of the theatre in 2004. During his time, Habima National Theatre became a leading theatre in the international arena as well, and he is the first artistic director in Israel to be elected President of the Union of European Theatres. During the period of his management, Ronen fostered a generation of young directors. He retired from artistic management in 2017, but continues to stage productions in Israel and abroad. His productions worldwide include: Michael Kolhaas at the Edinburgh Festival (1987); The Merchant of Venice at the Globe Theatre in London (2012); The Miser in Beijing and Saint Petersburg (2016); Alone in Berlin at ID Festival Berlin (2017); The Visit of the Old Lady at Maly Theatre in Moscow (2017); and Waiting for Godot at Manchester Festival (1994) and Cluj Festival (2018).

Based on literature Social and political issues