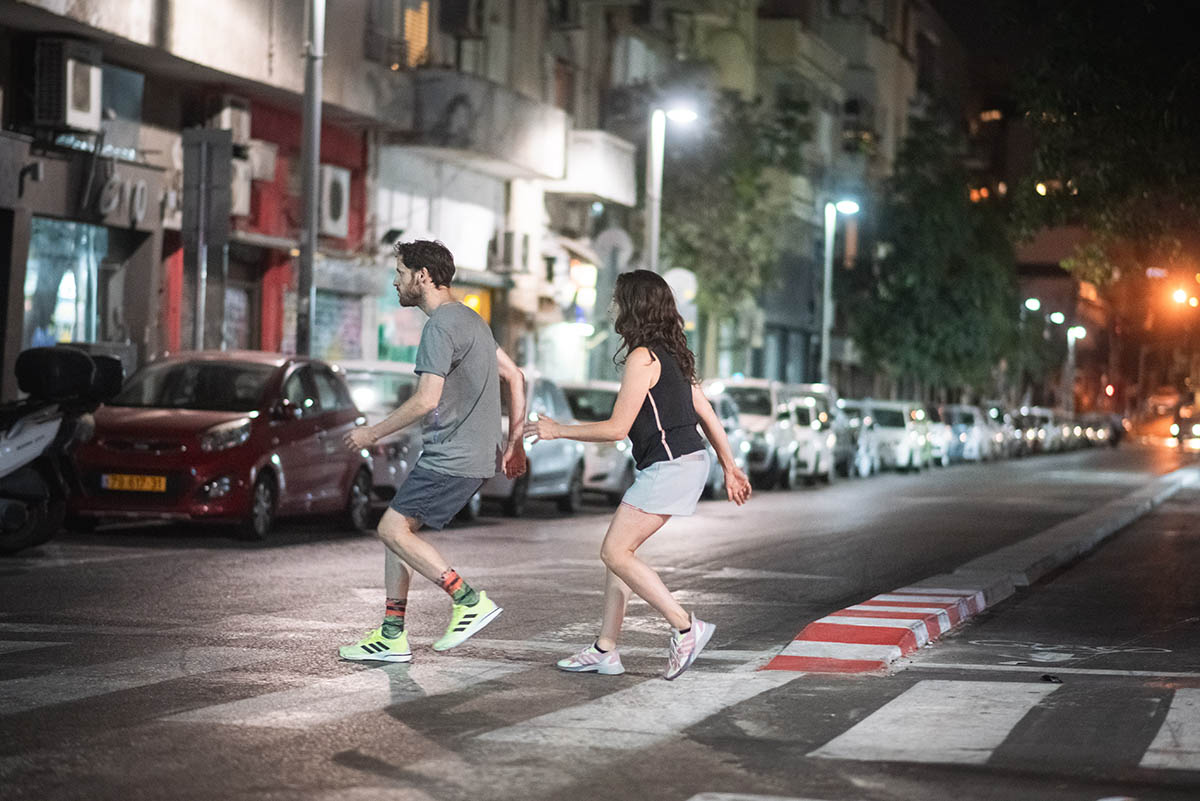 Bodystreet is a dance-earpiece work that takes place in the public space. We started the project by approaching women and men, young and old people, Arabs and Jews, refugees and newcomers, all living in South Tel Aviv, and asking them to share their private experiences walking down the street. These confessions were adapted and performed by Can Ensemble actors and are accompanied by an original score.

The audience, equipped with earpieces, goes on a tour of Florentin neighborhood. Along the way, they are joined by two performers who, through movement, emphasize the connection between the location and the person inhabiting it. In addition, the dance intensifies the experience of being ‘the other,’ the ‘odd one out’ that arises from the soundtrack. Thus the audience is granted a ‘conscious stroll’ that turns the threatened, crowded, wide-open, loud and militant Israeli space into poetry, a street poem.

Bodystreet invites us on a loitering tour of South Tel Aviv, similar to the downtown area of every big city. It’s that same municipally neglected yet gentrified bohemian section of town. We wander without a guide, not knowing where it may lead us. Listening to the monologues puts us in an inquisitive, reflective mood. The people we listen to give voice to the silenced ‘others,’ those on the fringe of society, that for most of us are often transparent. We learn of the suffering one experiences merely for being foreign, ousted, those of different ethnicity, nationality, race or skin color than the hegemonic social group.  The show’s texts and physical images produced by the dancers provide a glimpse into the bowels of Israeli culture, yes still relevant to every metropolis dealing with immigration, refuge and otherness within the public sphere.

Bodystreet acquaints us with humans on a very personal level, making us feel like we’re in a “face-to-face” encounter. Hence, it seems as if the work acts in response to philosopher Emmanuel Levinas’s plea to consider the other an infinity and so undefinable, narrowed down to a stereotype. The person will forever be “more” than we can possibly imagine. Simultaneously vulnerable and fragile, but also a “teacher,” someone from whom we can always learn something new about ourselves, about the world.

Ido Bornstein (Director)Playwright, director, writing teacher and dramaturg at Can ensemble, which he founded with director ShlomoPlessner. Graduate of Tel Aviv University’s Film and TV School’s writing program, where he later taught. Writer of the ensemble’s Sex Project, Sunrise (The New York Theater Workshop requested the play for a staged reading), Dogs (the production was invited to take part in the New York Fringe Festival), Hunger (Winner of ‘Best Fringe Show,’ the play was selected to represent Israel at FIND – the new playwriting international festival at Berlin’s Schaubühne Theater), Lice, a new adaptation of Medea, and more. He wrote and directed the ensemble’s Operation Silk Gloves (commissioned by the Israel Museum and premiered at the Israel Festival) and Body-Street. Head writer of the TV show Florentin. Other TV writing credentials include Sesame Street, Twenty Plus, and others. He developed a collaborative method of writing with actors, resulting in plays based on personal materials. Awarded Best Teacher by the British Consulate’s BI ARTS program and the Scriptwriting School.

Uri Shafir (Choreographer, Dancer) A Performance artist, Dancer and choreographer, Uri Shafir is a graduate of MASPA (kibbutz Ga’aton Dance Workshop), Kelim Choreography Center (Israel), and the MA choreography program MASTER EXERCE in Montpellier France, at ICI-CCN (artistic director – Christian Rizzo). He has been creating works since 2009 and presenting them on different platforms in Israel and abroad. He received the Israeli Ministry of Culture’s Award for young choreographers in 2017. As a dancer, he worked in Batsheva Dance Company, and in dance works by Yasmeen Godder, Niv Sheinfeld and Oren Laor, and many other Israeli artists. Uri is also a Gaga teacher, and he holds classes and workshops in Israel and abroad.

Can ensemble
Can ensemble is a theater group formed in 2000 to explore theatrical and performative formats and to formulate a singular stage language. Connecting documentary with the poetic, Can ensemble delves into local materials in order to illuminate the unique and hidden aspects of Israeli reality while creating theater that reflects the vibrance, scents, stings and laughs of this country. Can ensemble performances feature original plays written especially for the group; theme performances created in the theatre lab and meetings between the creators and performers in a rehearsal room; location-oriented performances; and contemporary adaptations of classical texts. Can ensemble productions include:Sex Project, a trilogy focusing on the sexual event and the way we encourage our body, exploring how the Israeli identity shapes our passion and ability for intimacy; Dogs, an all-male Arab-Israeli Romeo and Juliet musical; Operation Silk Gloves, written especially for the Israel Museum and premiered at the Israel Festival, exploring how the establishment uses art to establish identity. 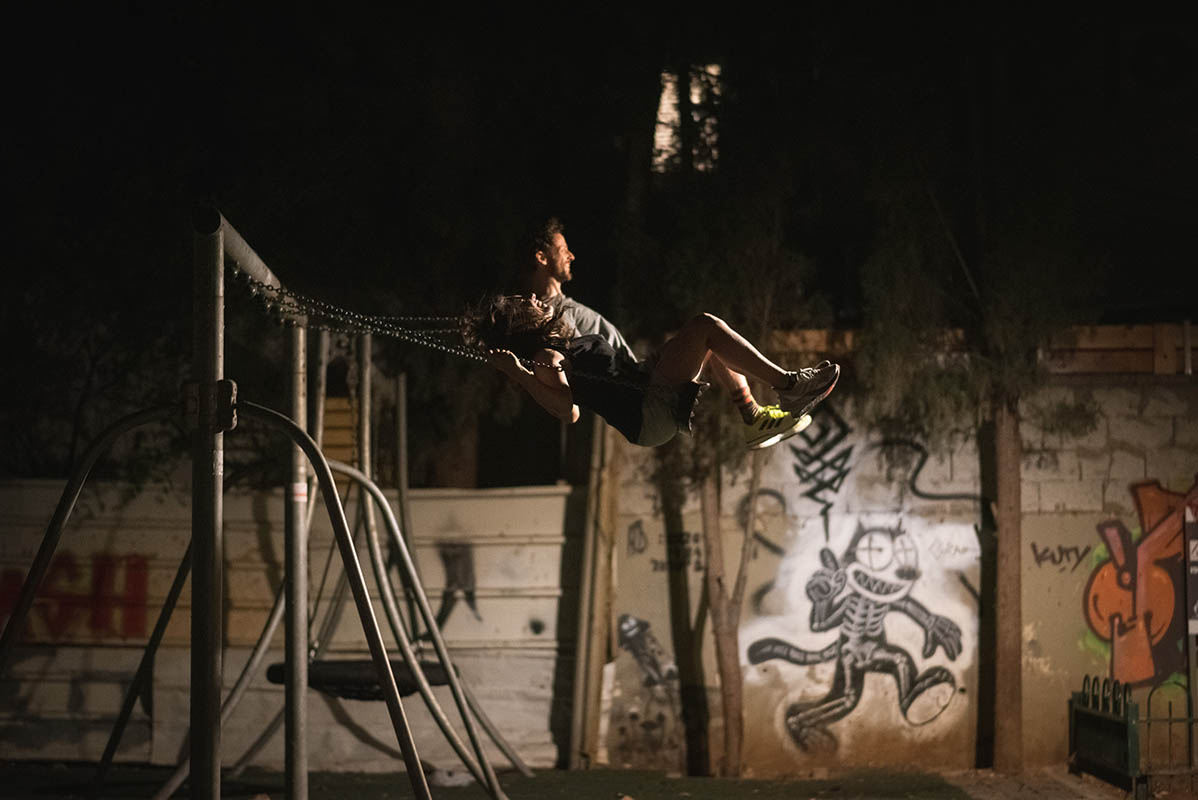 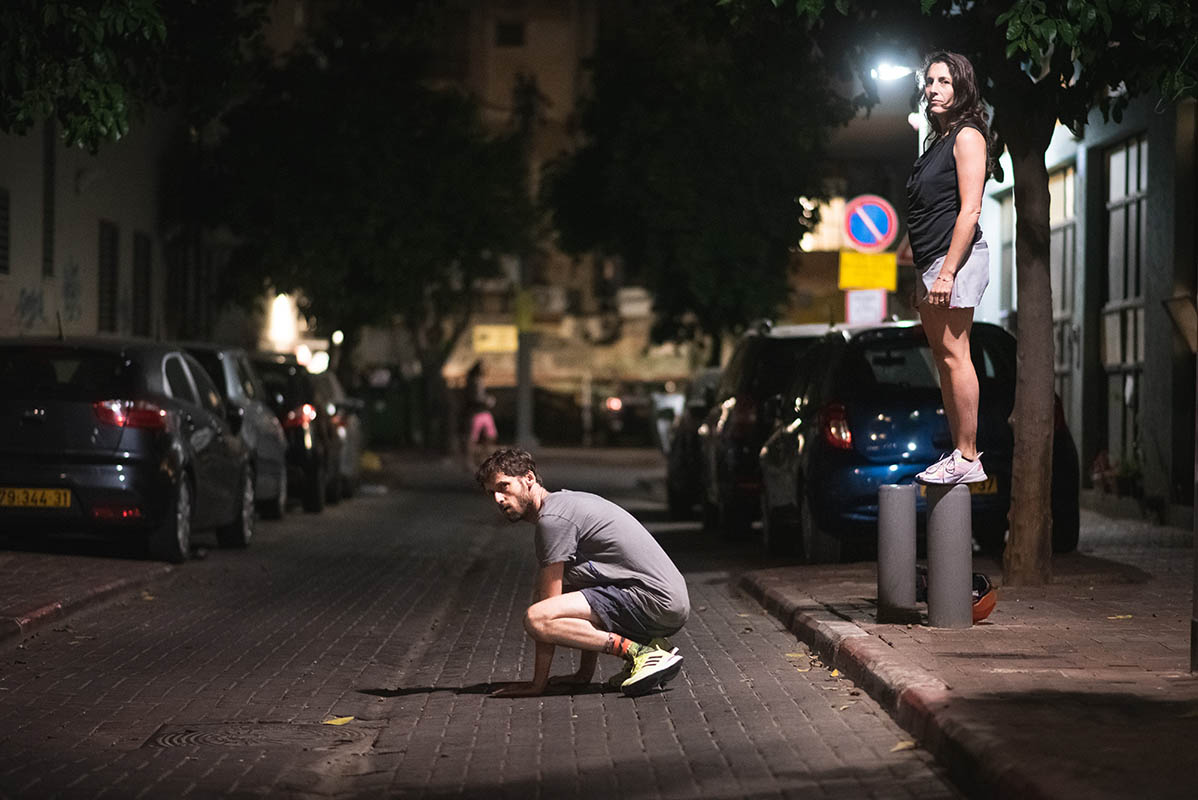