An artistic swimming team is practicing in a pool. They talk, they fight, they fall in love, and all this while being in the pool. But the voices heard are those of elderly people. Aquarium is a new experiment in theatre. Instead of a play, this is a collection of recordings with elderly people speaking about family, sex, destiny, illness, conscience, and so forth.
The production heightens the tension between the young body and the voice of the elderly. This is a reexamination of patterns of thought and speech, and points of similarity and difference between the generations. The pool belongs to the elderly alongside the athletic swimmers. The actors portray a new person, a sort of “third person”, a combination of young and old. The voice loses its meaning. The body takes on a new form, and the result is humorous and moving.

“An unusual experience. Different. Delightful. Highly recommended. The best show of the year. Take those you love for an hour of pure pleasure”.

From the Director and Playwright – Ronnie Brodetzky
One hot summer day I was sitting in a café reading a book of Japanese poetry. There was a lively conversation at a nearby table. Two elderly women were conversing animatedly – one offended, the other offending. One accusing, the other asking for forgiveness. They disturbed me in my work. They were more interesting than any of the Japanese poems in the book. I picked up a pen and on a napkin wrote down sentences I managed to pick up. I thought to myself that one day I would put them into a story. When I returned home and looked at the napkin, I was disappointed. The text bore a strong resemblance to what had been said in the conversation, but the colorful, living spirit had disappeared.
Words are merely a form, a vocal expression, a physical gesture. They are a way of arranging them in a sentence. They are the hidden dynamic of a lively conversation, of a good story. In Aquarium I investigated dialogue together with the creative team and the actors. What is the way of thinking that causes a person to express himself in a particular way? What in an everyday conversation receives wider meaning that is worthy of being adapted to the stage? How does an everyday conversation transform into a scene with a beginning, a middle, and an end? The play enabled me to engage with dialogues that are not “well organized”, that are natural, ordinary, simple, and yet possess poetic meaning; meaning that goes beyond the everyday.
Lip sync created an encounter between the artificial and the natural. Lip sync obliges us to listen: Just as the words and content interest us, so does the breathing, the coughing between one word and another, the confusion and indecision in choosing words.
The actors are bound to a voice that is not theirs. They do not have the ability to express themselves by changing their tone, by making a different choice in expressing a word, in adding a silence or a vocal gesture. In this rigid situation they have to breathe life into it, create something living, here and now. The very heart of the art of acting. The actor’s interpretation is between sound and sound, it is in his body and facial expressions.

PDF of the show’s playbill > 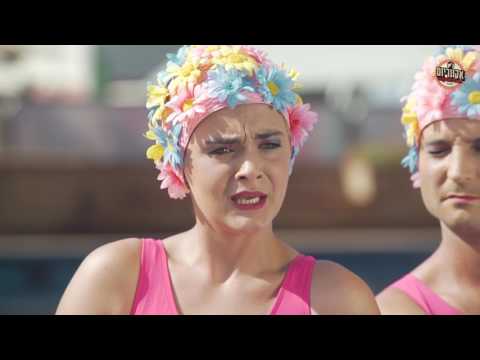