By Danielle Cohen Levy and Namer Golan, In conjunction with Gil Lavi and Tomilio Munz

An expert juggler, an acrobat and dancer, a musician and inventor, and a brave warrioress present an archive of 23 thoughts about conflict they collected in the course of one year. Each of them happened in reality. The show brings a unique point of view of personal and daily conflicts on various issues, meaningful or common, from the perspective of life in the Middle East.

“International theatre at its best, really!”

Danielle Cohen Levy is a director, playwright and performer. She holds an M.F.A in Theatre from the Tel Aviv University and is the winner of several scholarships in directing, writing, and acting. Her works are well received by audiences and critics alike.

“WCS will probably be the new cult theatre show.”

Namer Golan is a juggler, performer and director. An autodidact who studied juggling, clowning, and puppet-theatre, and is currently researching the history of circus and the mathematics of juggling. The collaboration between the two was born out of their mutual interest in creating contemporary circus, and a documentary performance that would deal with real-life issues. In 2014, together with

Tomilio Munz and Gil Lavi, they formed the WCS Company and have since performed their show numerous times to critical acclaim and audience popularity. 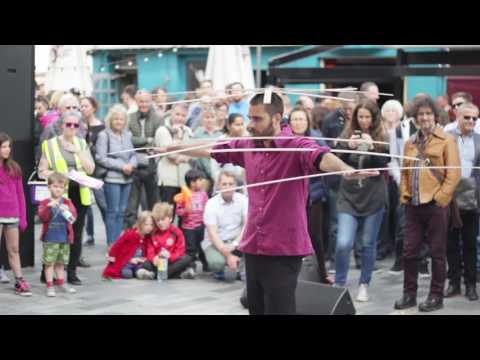